So here we are back at Zamling Guesthouse in Namche with Tsedum Sherpa and his lovely family. I just love this place it has such a great vibe, very clean, hot shower and loads of old amazing climbing paraphenalia. Dawa and I arrived the day before yesterday after the slightly painful hike up from Phakding as it has been sometime since I have been to altitude.

Just love the flight into Lukla as landing is like a rollarcoaster. The airstrip is only about 500mt long and is perched on the edge of a mountain. Of course it is very steep as to slow the planes down before they run into the concrete wall at the end. It was my third flight into Lukla and made sure I sat in the front seat so I got maximum exposure! We were very lucky to have perfect weather and get great views of the mountains the whole flight too.

Dawa met me at the airport and we had to wait sometime for all the bags to arrive as they came on later flights. I instantly took a liking to him as he has a very friendly smile and is always making sure I have all my things. He is very trustworthy and I could basically give him all my gear to mind and he wouldn't do anything but lock it away for me. He loves his job, is very proud to be a climbing sherpa and has worked really hard to be one. As we hike the trail so many people stop to talk to him and he is very respected. He used to work herding the cows along the trail with loads, then became a porter, a cook, trekking guide and then finally a mountain guide. He talks to everyone from porters to climbers and has no ego at all about himself which is really great and quite normal among the Sherpa people. People here are so friendly and helpful and the ones that speak English just love to practise it with you.


We hiked to Phakding the first day which is only a few hours from Lukla and around the same altitude...2800mt. We stayed in a lodge on the less busy side of the river however there were some Indians staying there that weren't so quiet whilst watching the cricket! This part of the trail is super busy with trekkers, porters, horses, cattle and is really dusty. The next day we took five hours to hike up to Namche. The trail stays in the valley for quite sometime, occasionaly crossing the river then after the last suspension bridge it heads up very steeply to Namche which is at 3450mt. I was feeling fine until probably the last hour of the hill when I actually started to feel the altitude. This came as a bit of a shock to me as normally I wouldn't feel it at this height! I guess its been around three years since I have been to altitude so it is understandable. Still we managed to make it for lunch in Namche and overtook most people on the trail. Yesterday I had a rest day which was fantastic and I felt so much better today for doing that. Just went for a walk into town to check out all the new shops and buildings that have gone up since I was here in 2008. It has changed quite a bit really and there are alot more gear stores that sell the real deal not just the fake brand clothing.

Today Dawa and I took an acclimatisation walk up to Kunde Ri. It is a high point on a ridge behind the village of Kunde and is at 4100mt. We set off at 8:30am and arrived at the top at 11am after me stopping to take photos every hundred meters! It was a perfect and clear morning and we could see all the way up the valley to Everest. Once we reached the top of the ridge we could see all the way over to Thame on the other side and even saw the monastery there. I have seen alot of really great views in Nepal but I think this has to be one of the best. I did a handstand on the top, had some morning tea, took more photos then headed straight down the hill to Kunde and then on to Khumjung. Just before Khumjung I found a really great boulder so stopped for awhile to do some climbing. We had a delicious lunch at a lodge in Khumjung then went and visited the Hillary School. Dawa spent seven years there so he showed me around.

Once we got back to Namche we finished off sorting our loads out for the porters tomorrow and talked about our itinerary. We packed gear to go straight to base camp, climbing gear to go to the village of Lobuche and stuff to keep with us trekking. Tomorrow we will head to Diboche where Dawa's girlfriend lives. From there we go up the Gokyo valley to Gokyo village. Trek up Gokyo Ri, cross Cho La pass and end up back at Lobuche village. Alot of the hike will be above 5000mt which will be great for acclimatising. From Lobuche village we will pack our climbing gear and head up to high camp then climb Lobuche peak. We aim to be at Everest base camp around the 16th of April after also trekking up Kala Pattar. Dawa will need to find out exactly where our base camp is because by that time there will be around one thousand people there and hundreds of tents!! Scarey! I am enjoying the parts of the trip where there aren't too many people around before I get there.

So not sure where I will be able to connect to the net again. Probably not until we get back into the Everest valley from Gokyo. I imagine my next blog will be from the base camp. I had such a great day today and felt very strong so lets hope that continues the next few days. Also I have not had any tummy problems yet which makes a huge difference to how good I feel. So hopefully I will stay illness free and strong. Take care everyone and will write again soon.
Posted by Allie Pepper at 6:01 AM 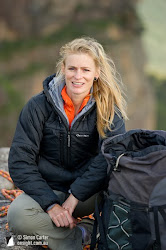 Allie Pepper
I am an Australian female mountaineer and this year I am attempting to summit Mount Everest without the use of supplementary oxygen. Follow my posts leading up to the expedition and from the mountain.